Media artist and activist Joseph DeLappe will present a visual lecture describing a lineage of creative projects and actions that function at the intersections of art, technology, social engagement and interventionist strategies exploring our geo-political contexts.

These will include the 2006 project dead‐in‐iraq, to type consecutively, all names of America’s military casualties from the war in Iraq into the America’s Army first person shooter online recruiting game.

He also created the iraqimemorial.org project, an archive and web based exhibition created from an open call for proposed memorials to the many thousands of civilian casualties from the war in Iraq. In 2013, he rode a specially equipped bicycle to draw a 460-mile chalk line around the Nellis Air Force Range to surround an area that would be large enough to create a solar farm that could power the entire United States.

More recently he worked with the Biome Collective in Dundee to create “Killbox”, a game about drone warfare. He will talk about these and many other projects utilizing digital processes as tools for political, social and creative transformation. 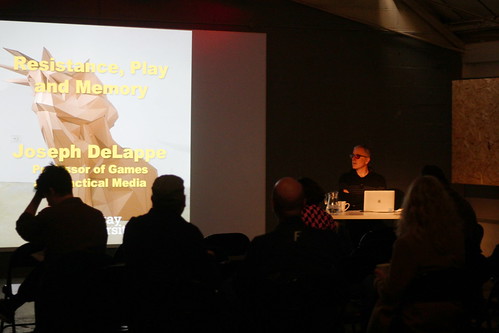